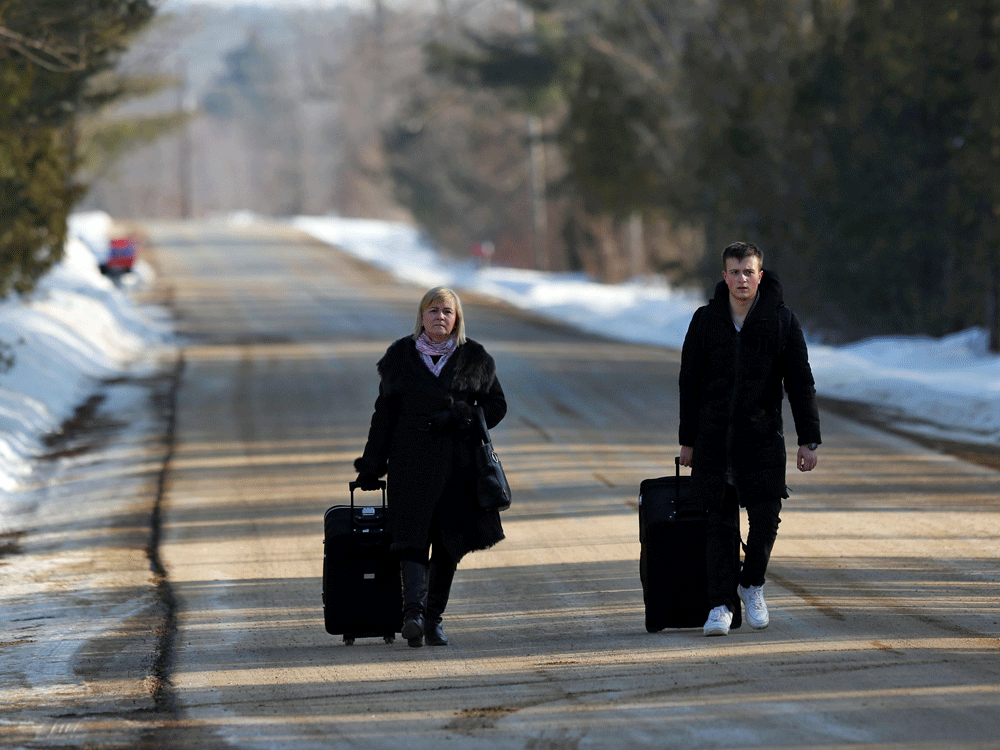 It hasn’t gotten much attention outside Quebec, but Roxham Road seems to be well and truly back in business. RCMP patrolling the border in Quebec recorded more than 4,500 “asylum claims and interceptions” in the first two months of this year, CBC Montreal reported recently, which is more more than in any previously recorded two months. As of the end of December, according to Immigration and Refugee Board statistics, even after two years of very few new arrivals, there was a backlog of more than 11,500 refugee claims solely among those who crossed the border “irregularly” — the vast majority of whom came across that well-worn path from New York State.

There are many countries on earth where people wouldn’t so easily tolerate thousands of people a month making a mockery of border security. Britain is one such country, but the government’s efforts to halt “irregular” crossings of the English Channel have run straight into the determination and dauntlessness of the people attempting to make the crossing. Improved security for truckers in Calais, on the French side, has made stowing away far more difficult and driven more and more people on to rickety watercraft, dramatically increasing their risk of death.

British Prime Minister Boris Johnson’s government recently came up with a very blunt, very plausible and — to many — very disturbing potential solution: Under yet-to-be-specified terms, single men who manage to sneak across or under the English Channel would be offered (or perhaps have thrust upon them) one-way tickets to the Republic of Rwanda, where their claims would be processed and where successful applicants would ostensibly be guaranteed a roof over their heads, basic freedoms and sufficient income supports.

This isn’t a brand-new idea: Rwanda has made similar deals in the past with Denmark and Israel. Conceptually, it’s no different than Canada’s Safe Third Country Agreement with the United States. The only difference is distance: Whereas Canada sends asylum-seekers who arrive at official land border crossings back to America to make their asylum claims — but not those who sneak across, amazingly enough — Britain would put them on a 6,500-kilometre flight to the heart of Africa.

It makes sense on several levels. It certainly ought to be a deterrent, both to those determined to risk their lives crossing the Channel and to those who profit from those people’s desperation. It’s not like Britain, by discouraging would-be Channel-crossers, would be consigning them to hell on earth on the European continent: France accepted as refugees or otherwise protected two-and-a-half times more people per capita than Britain did in 2019; Germany almost four times as many. And refugee protection is supposed to be about making people safe from specific forms of persecution that they could not escape at home, not ensuring them a prosperous life. Much as many who have made it as far as Calais would scoff at the notion of settling for Rwanda — still 160th out of 189 countries on the UN Human Development Index, despite remarkable progress made since the 1994 genocide — many of the world’s most objectively imperilled people, who could never dream even of getting as far as Calais, might jump through hoops at the chance.

A very diverse crowd of Brits and others are absolutely appalled by the Rwanda plan, of course. The opposition hates it: Shadow home secretary Yvette Cooper called it “unworkable, unethical and extortionate.” Some Conservatives hate it: former prime minister Theresa May objects on grounds of “legality, practicality and efficacy.” Refugee advocates say it’s illegal, as well as immoral. “Cruelty itself,” spat Human Rights Watch. Justin Welby, Archbishop of Canterbury, went so far as to call the plan as “the opposite of the nature of God.”

Well, frankly, God hasn’t been doing a great job on the global migration file. Divine perfection is not, and will never be, on offer. No Western country will ever take every single person with a valid refugee claim, regardless of its stated intentions. We erect countless walls to protect the world’s most desperate people from ever getting here in the first place. They’re mostly called “visas.”

Our goal should be a net reduction in human misery, and the U.K.-Rwanda plan, despite serious flaws (first and foremost, the U.K. government very much seems to be overselling just how safe Rwanda is for refugees) might offer some promise there. Certainly any Canadians tempted to judge should look in the mirror immediately. At most, this country is sporadically generous to certain groups of people who make headlines: Vietnamese, Syrians, Ukrainians, those who worked with us in Afghanistan. And nowadays our immigration bureaucracy is so hawkish and sclerotic, and the government so in thrall to that bureaucracy, that we can’t even help the people we have pledged to help. No one should be surprised at reports of Afghans and Ukrainians offered safe passage to Canada waiting weeks and months for visas and other paperwork that might never come.

It’s understandable that Britain’s plan makes people shudder. But whatever its flaws, it’s nevertheless the sort of bold thinking that the we need to consider if we ever want to inject some fairness, coherency and safety into our attempts to help the world’s most desperate people.

Sign up to receive the daily top stories from the National Post, a division of Postmedia Network Inc.

Thanks for signing up!

A welcome email is on its way. If you don’t see it, please check your junk folder.

The next issue of NP Posted will soon be in your inbox.

We encountered an issue signing you up. Please try again