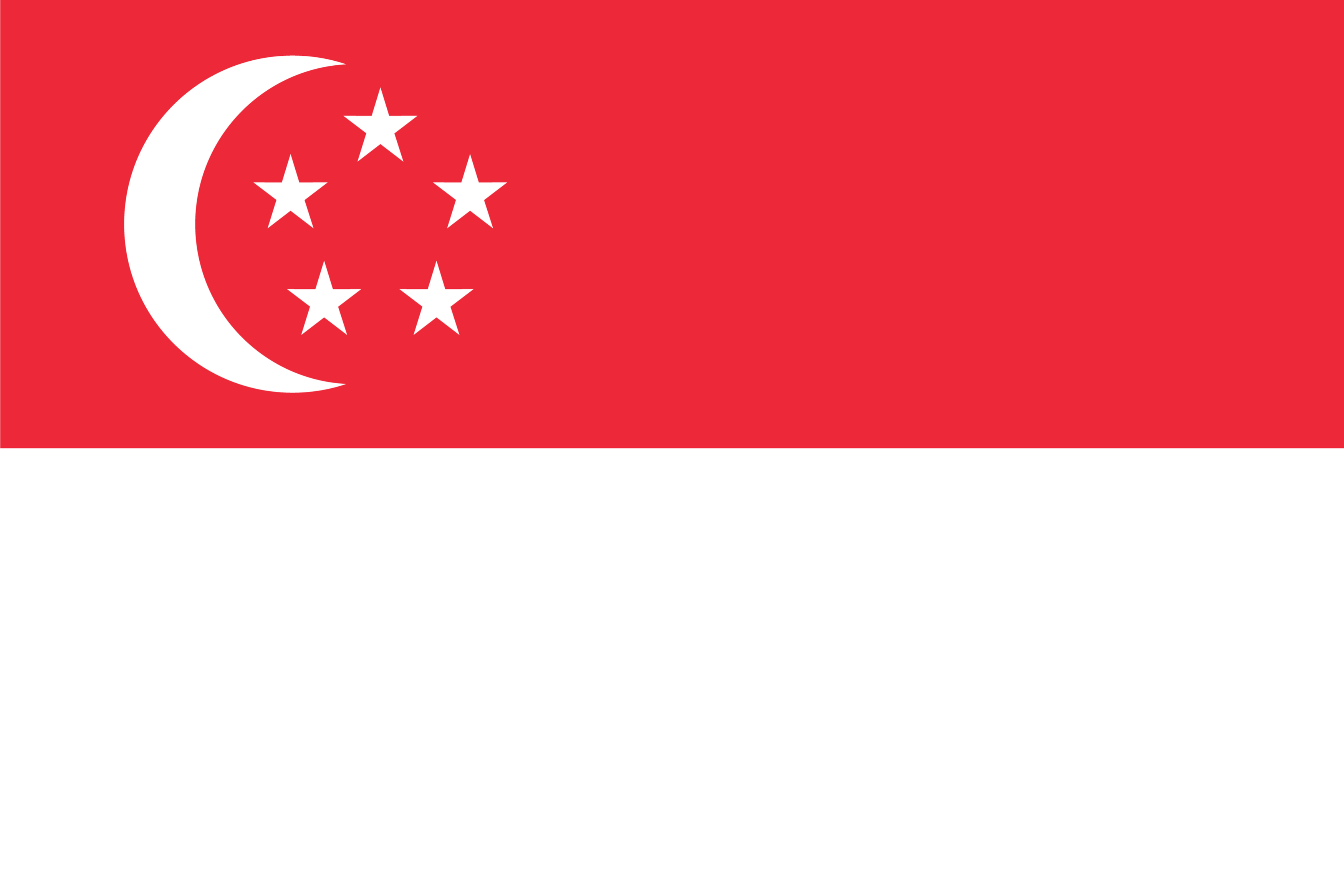 The National Flag of Singapore was officially adopted on December 3, 1959.

The National Flag of Singapore features two equal horizontal bands of red (top) and white. On the hoist side of the red stripe is a vertical, white-colored crescent moon that faces the flag’s fly side. The crescent moon is partially enclosing five equal-sized white five-pointed stars that are arranged in the shape of a pentagon. The white color is said to represent the virtue and purity of the people. The red color stands for unity, equality, and a sense of brotherhood among all citizens of Singapore. The five white stars represent the nation’s ideals of equality, democracy, progress, peace, and justice. The waxing white crescent moon symbolizes a young nation (Singapore) on the ascendancy. The flag has a width-to-length ratio of 2:3.

History of the Flag of Singapore

During the 19th century, the British ruled over Straits Settlements and the colonial flag was flown over the region. The colonial flag was designed as a blue field with the Union Jack set on the upper left portion of the flag’s hoist. The flag at that time also featured three golden crowns, representing Malacca, Penang, and Singapore, which had been grouped to form a single settlement. Singapore did not have a flag of its own, but it had a coat of arms which was granted in 1911 and depicted a Lion. During WWII, Singapore was occupied by Japan and the National Flag of Japan was flown over the region. However, after WWII, Singapore became an Independent Crown Colony and used a modified colonial flag which featured a single crown, instead of the previous three crowns. The national flag was designed by a committee led by Toh Chin Chye, who later became the nation’s, Deputy Prime Minister. The team initially envisioned a flag with a red background, but such suggestions were dropped after the team realized that the color had Communist connotations, which was a sensitive issue during the Cold War. Toh Chin Chye’s committee eventually developed a design after incorporating suggestions from the public. According to the committee, the moon and stars featured on the flag were selected from proposals offered by the Singapore public. This period also coincided with the passing of the nation’s flag and the National Anthem Ordinance of 1959. The national flag of Singapore was adopted on December 3, 1959, when the country became a self-governing part of the British Empire. The flag was briefly replaced in 1963 by the flag of Malaysia after Singapore joined the Federation of Malaysia, but was later reintroduced after attaining full independence in 1965.

Historical and Other Flags of Singapore

The National Coat of Arms of Singapore

The National Coat of Arms of Singapore was adopted in 1959. It is composed of a lion and a tiger standing upon stalks of rice and supporting a red shield. The shield bears a white crescent and five white stars. The white crescent symbolizes a young nation (Singapore) on the ascendancy. The five white stars represent the nation’s ideals of equality, democracy, progress, peace, and justice. The red color stands for unity, equality, and a sense of brotherhood among all citizens of Singapore. The lion and the tiger represent Singapore and Malaysia respectively. The blue ribbon at the base is inscribed with “Majulah Singapura” (“Onward Singapore”) in gold letters.

Majulah Singapura (“Onward Singapore”) is the national anthem of Singapore. The music of the anthem and its lyrics have been created by Zubir Said. The anthem was officially adopted in 1965.

Let us progress towards happiness together

May our noble aspiration bring

In a new spirit

Let our voices soar as one

The Currency of Singapore is the Singapore dollar

The first series, issued on November 20, 1967, has six denominations of 1-cent, 5-cent, 10-cent, 20-cent, 50-cent, and 1-dollar. All coins in this series have the same reverse design, which is, the denomination (value) in the center. The year-date is on the top. There are two stalks of paddy on the left side and “Singapore” is written on the right.

The second series, issued on December 2, 1985, initially had four denominations viz. 5-cent, 10-cent, 20-cent, and 50-cent. These were followed by the 1-cent and 1-dollar denominated coins on September 28, 1987. This series carries the Flora theme and features local plants and flowers. It seeks to improve the country’s image as a garden city.

The third series of coins were issued on June 25, 2013. This has five denominations; 5-cent, 10-cent, 20-cent, 50-cent, and 1-dollar. The lion-head symbol is minted on all denominations. The size of the coins increases progressively, that is, the 5-cent coin is the smallest and the 1-dollar coin is the largest.

The next note series was “ship” (1984 – 1999). In the “ship” series, the 20-dollar notes were withdrawn and new 2-dollar notes were introduced. This series highlights the country’s rich shipping heritage and contributions of merchant shipping to Singapore’s economic development.

In the “portrait” series (1999 – present), the 1-dollar and 500-dollar denominations were not included. This series contains a portrait of Encik Yusof Bin Ishak, Singapore’s first president. The reverse side of each denomination features a unique theme based on the first President’s biography.

The “Lion City” state has used different currencies during its long history. Singapore used Chinese coins during the 14th century and the Spanish and other silver dollars (Mexican, Hong Kong, Peruvian and Bolivian) during the major part of the 19th century. From 1826-1867, the Indian Rupee was used as currency. From 1903 -1939, the Straits dollar was used. This Straits dollar was replaced by the Malayan dollar – which was used from 1940-1953. The Malaya and British Borneo dollar was used from 1953 onwards. This common currency was used even after Singapore had joined Malaysia in 1963. Singapore gained independence in 1965. On April 7, 1967, the Board of Commissioners of Currency, Singapore (BCCS) was created and Singapore started using its currency, the Singapore dollar.

Why Is Education Important